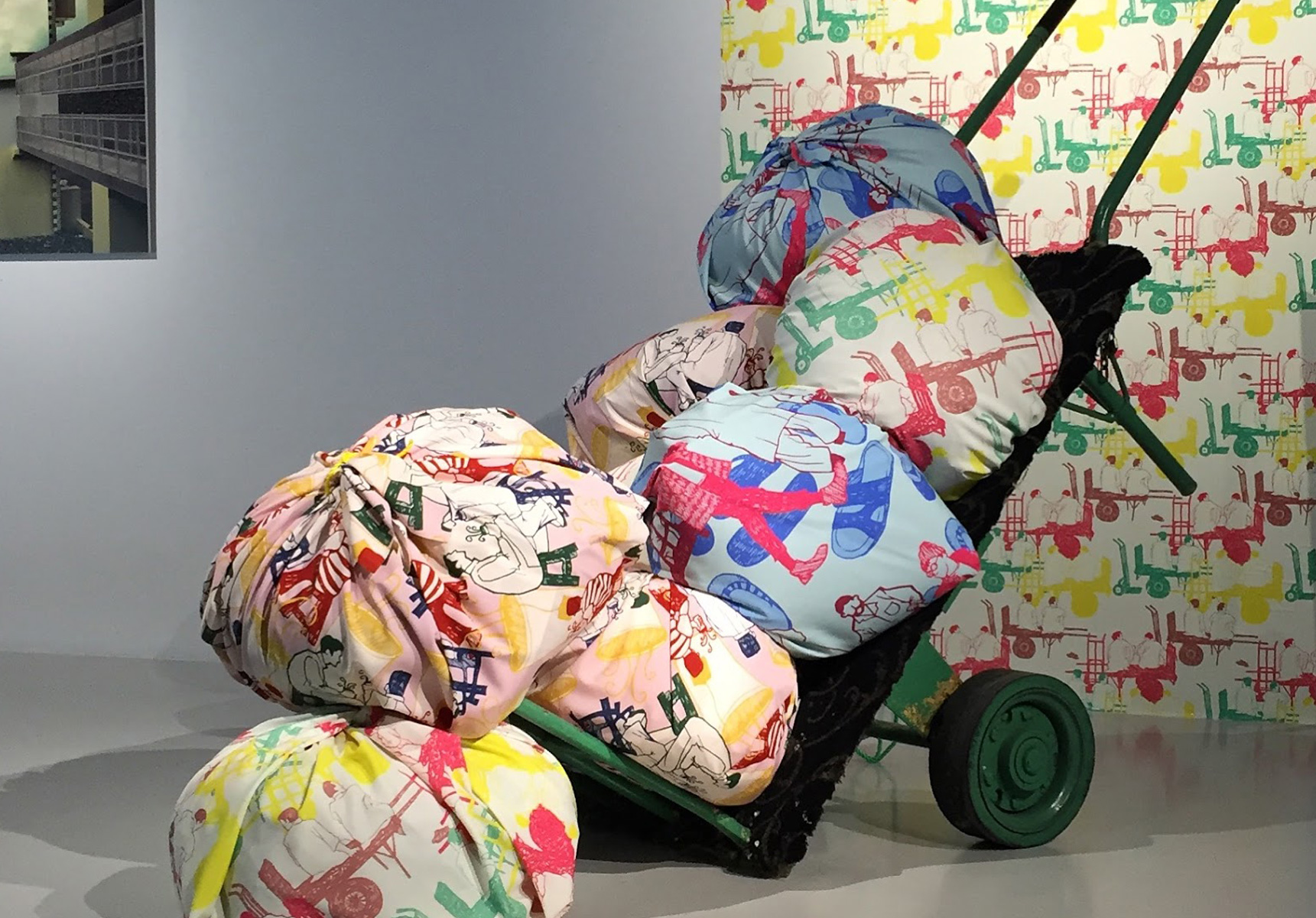 A new exhibition at Maraya Art Centre staged in partnership with Unlimited Arab Exploration explores through art the fleeting nature of life in the UAE, says Patrick Martin Lichty

Al Haraka Baraka, or In Movement There is Blessing, refers to the phenomenon that the UAE, and the Trucial States before it, has been a historical land of nomads with few borders. Even after the formation of the UAE 44 years ago, this shifting dynamic of peoples along the Gulf Coast continues as the native population totals under a fifth of the overall inhabitants. What then, are the social dynamics and identity politics, implied or not, of a nation whose peoples are in continual flux?

The exhibition was staged in partnership with U.A.E. Unlimited Arab Exploration, the art platform established in 2015 by HH Sh Zayed bin Sultan bin Khalifa Al Nahyan. At its premise is a profound desire to give young Emirati and UAE-based emerging artists the opportunity to create and develop new artworks for an exhibition held in March each year in a different Emirate. Shobha Pia Shamdasani, the appointed director of the platform, works closely with the selected curator on all aspects of the exhibition. “We felt the collaboration with Maraya Art Centre in Sharjah was truly ideal,” says Shamdasani. “I asked Giuseppe Moscatello and Dr. Alexandra MacGilp to work on the theme of migration. Together we decided on the title Al Haraka Baraka - In Movement there is Blessing, taken from an Arab proverb. For us this is a first for the UAE—to have an exhibition with an Arabic title. We also wanted the exhibition to highlight all genres of art, including performance art.” 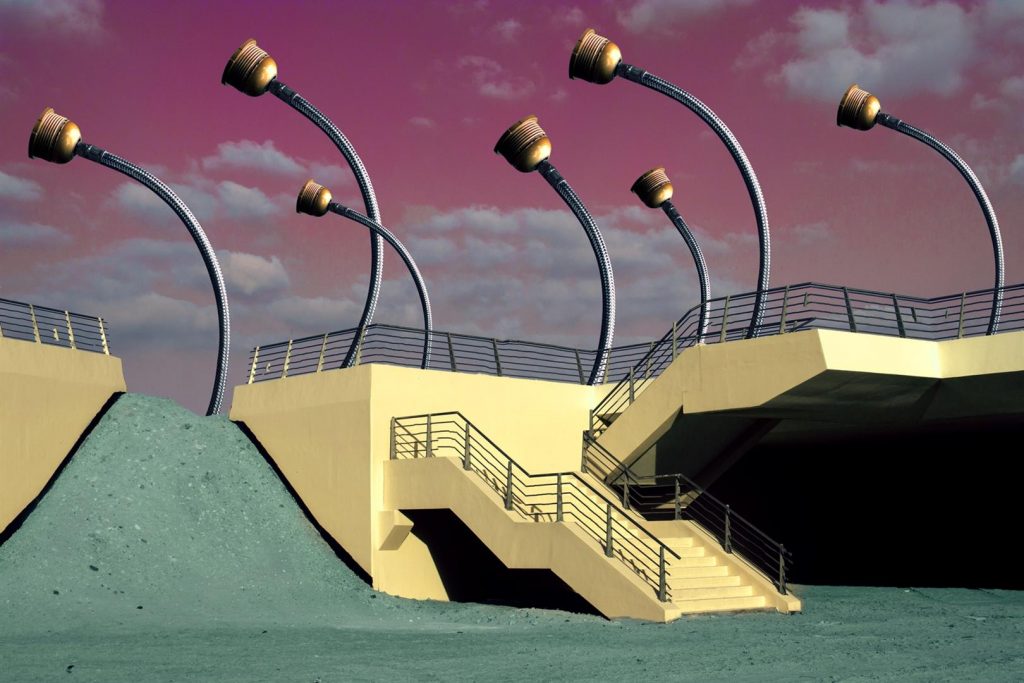 Alaa Edris Reem Dream 02. 2015. Digital Print. 90 x 65 cm.
Curator Alexandra MacGilp frames the existential UAE state in the Emirates wonderfully by noting a number of things about everyday life here. In the UAE, there are over 75 nationalities in the over eighty percent of the non-native population, with languages and dialects flying like so much word salad. Of those many nationalities, there are many “third culture” children who are expatriates that have ever set foot in their home country. MacGilp also refers to cyberpunk author William Gibson’s quote, “The future is already here—it’s just not evenly distributed.” She also wonders if life in the Emirates has outstripped any notion of looking towards the future, which is reasonable in a place where architecture grows like so much bamboo.

This exhaustion of the vision of the future into an accelerated present is evident in the work of Alaa Edris, whose State series questions the notion of progress as proportional to the number of structures being raised. The State images are architectural assemblages on, or sometimes over, stark arid landscapes. These structures incorporate the ever-present forms of slick hi-rise, industrial parks, and unfi nished concrete to imagine potential emerging futures that exist only in their potential.

Hind Mezaina’s The Color of Happy engages the UAE’s government level concern with issues like youth, happiness, and the future, as there are minister-level offices for each. Happy consists of two elements, a shelf with a questionnaire asking the “level of happy” the visitor is feeling (by circling one of three smiley faces), and why. The implied exchange is that in return for completing the form, they can take a postcard excerpt of the six abstract digitally minimal large-scale prints abstracted from ‘happy’ subjects like food, the beach, and the Dubai skyline. From these, Mezaina states that happiness in the UAE might be considered as a social gesture, a tool, a marketing plan, or all of the above. Like MacGilp and regional artists like Larissa Sansour, Mezaina and Edris collapse the future into the present through the gestures of accelerated development in the Gulf. 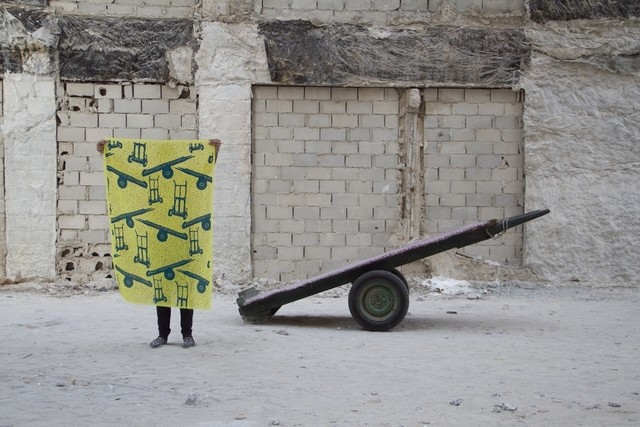 Khalid Mezaina. Observations on Trade. 2015. Screen printed textiles. 100 x 150 cm.
Another aspect of the UAE that MacGilp curates into Al Haraka Baraka is the transience of its inhabitants, most of it linked to work. Reem Falaknaz’s Ana Anqushu creates a beautiful portrait of Afghani coppersmith Ghulam Mohammed Andalib. Each year, Andalib comes to Dubai’s Global Village to perform his craft for the attraction’s visitors. In creating his metal works, he uses Islamic patterns and poems from Hafez, Ghazals, and praises to the Prophet. Through the video, combined with one of Ghulam’s finely wrought samovars, Falaknaz creates a conversation about being in the UAE and the material trace that presence leaves here.

Khalid Mezaina’s Emirian installation engages places, especially Dubai’s “old town” of Deira as a space for identification. He does this through the use of textile, as this is an ever-present aspect of the area’s souks, as well as individual (or not) statements through items like T-Shirts, another staple of the souk. The installation has a laborer’s trolley with a large parcel, wrapped in his textile design, encapsulating his identity without letting the onlooker delve inside. Much like the person wearing a new T-Shirt in a Deira souk, Emirian displays one’s public appearance while not revealing the private.

Music is another universal cultural meeting place. Tulip Hazbar’s From Sounds and People: Sharjah is an ethnographic audiovisual installation dealing with people in Sharjah through their music and if their tastes changed any since their arrival. This is one of the more conversational pieces in the show, and the nature of Hazbar’s hand-drawn animations lends a certain depth of humanity to the work. 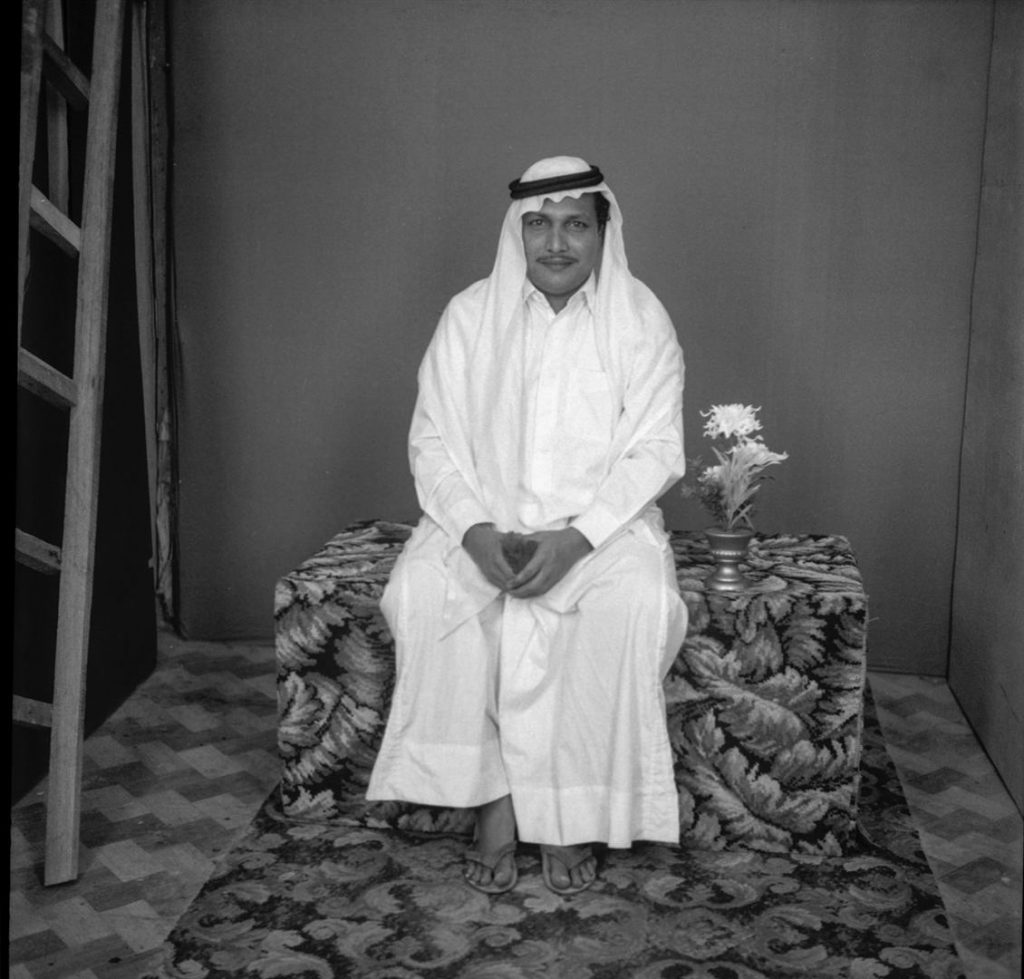 Ammar Al Attar. From the collection of Reverse Moments project.A scan from 1970s black and white negative.
Khorfakkan-based Mohammed Ahmed Ibrahim, one of the seminal five pioneering conceptualists of the UAE, contributes Fresh and Salt, a beautiful assemblage of stones from the Caspian Sea, coral from Khorfakkan, and copper wire. Reading Ibrahim’s description of how he discovered his method in exploring the qualities of the land reveals a sublime quality akin to Western artists like Goldsworthy but with a uniquely Emirati context borne from the specificity of the land. To consider that as he discovered his processes, he would be the first human to see the bleaching of a rock or the color of a stone gives his work a transcendent quality as well as provides grounding for the show.

Al Haraka Baraka, or In Movement There is Blessing shows the vibrancy that comes from a culture that is always in a state of transition and development. It reveals the life that issues forth from the constant exchange of cultures. It also examines the issues that arise in a region that is building roots from a history of nomadic existence.

In Movement There is Blessing runs at the Maraya Art Center in Sharjah from February 25 to April 30th.