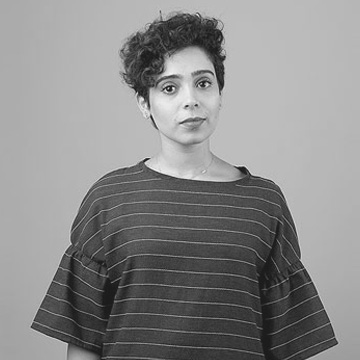 Sara Al Haddad (b. 1988) received her BFA in Visual Communication from the American University in Dubai (AUD) in 2011. As a Fulbright Foreign Exchange scholarship recipient she attended Maryland Institute College of Art (MICA), in Baltimore, USA where she received her MFA in Sculpture.

Al Haddad’s first solo exhibition, Bursting at the Seams was presented in the Pavilion Downtown Dubai in 2012, followed in 2013 by her second solo show, i know, i knew in the Gallery of Light, the capstone of a two-month residency at Dubai Community Theatre & Arts Centre (DUCTAC).

In 2014, Al Haddad was awarded a three-month residency at Artist in Residence (A.i.R.), in Dubai, culminating in an open studio exhibition parallel to SIKKA art fair, and site-specific works commissioned for Art Dubai Projects, Art Dubai Fair, in Madinat Jumeirah.

Sara will be one of the five participating artists in the UAE National Pavilion at the Venice Biennale 2017 curated by Hammad Nasser, entitled "Rock, Paper, Scissors: Positions in Play".