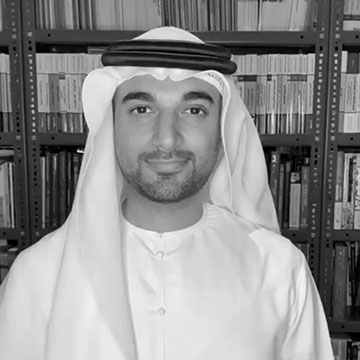 Gaith Abdulla is a writer, critic and Gulf studies specialist based in Dubai. His research is multidisciplinary, and focuses on socio-politics of the Gulf as well as its intersection with the region’s contemporary art and culture. He has published social, cultural and political commentary in local and international media, including CNN Arabic, Gulf News and Al-Monitor, and has authored peer-reviewed research papers and monographs. He has attended and presented at numerous conferences, workshops and panels on Gulf affairs. He began building a collection of emerging Emirati art in 2012. Pieces from his collection have been included in major exhibitions and reviewed in art publications since. Complementing this, he is involved in various cultural entrepreneurship initiatives. He graduated from SOAS with a BA in Law and Politics and an MA in International Studies and Diplomacy. You can follow him on Twitter @gaith_ab