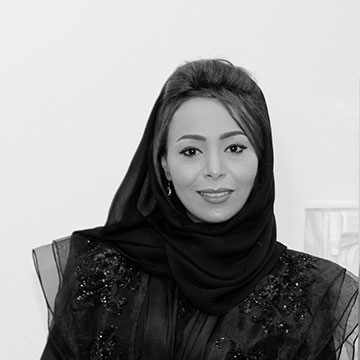 Ebtisam Abdulaziz is a multidisciplinary artist and writer. Reflecting her Bachelor’s Degree in Science and Mathematics, Abdulaziz incorporates her unique perspective on mathematics and the structures of systems to explore issues of identity and culture through installations, performance pieces and works on paper. Her works evidence a fascination with systemic ways to produce emotionally or intellectually meaningful forms of expression. Combining the scientific with the arbitrary, at times juxtaposing the two in order to force the viewer to question their assumptions about rules in the natural and formulaic world, Abdulaziz is methodical in her explorations. Her approach functions within the realm of Gestalt theory and the recognition that understanding something is greater than perceiving the sum of all of its parts. Abdulaziz is an established artist who has exhibited extensively both regionally and internationally including participation in the Inaugural UAE and ADACH Pavilions at 53rd Venice Biennale, The 7th and 10th Sharjah Biennial, The Kunst Museum, Bonn, Vitra Design Museum, Basel, The Mori Art Museum, Tokyo, The Institut du Monde Arabe, Paris, Benin Biennial 2012, FotoFest Biennial, The Guggenheim Abu Dhabi, and American University Museum at the Katzen Arts Center, Washington DC. Ebtisam Lives between Abu Dhabi/ Washington DC.