U.A.E. Unlimited Arab Exploration is a springboard for emerging artists 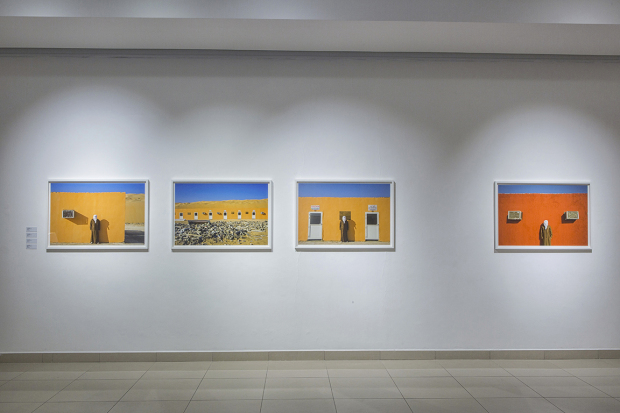 Promoted by and under the patronage of H.H. Shaikh Zayed Bin Sultan Bin Khalifa Al Nahyan, the initiative nurtures the youngest generation of Emirati and GCC creatives.

Emerging artists from the UAE and the region are making their presence felt in this busy art season through a group exhibition titled “A Public Privacy”. This show marks the launch of “U.A.E. Unlimited Arab Exploration”, a new initiative, promoted by and under the patronage of H.H. Shaikh Zayed Bin Sultan Bin Khalifa Al Nahyan.

The open format platform is focused on nurturing the youngest generation of Emirati artists, as well upcoming UAE-based and GCC artists. It aims to support the artists by assisting them in the creation and production of new projects; and by organising exhibitions of their work during the spring art season to provide them national and international exposure and opportunities for wider representation at an early stage in their careers.

The show is curated by well-known artist, curator and poet Cristiana de Marchi, and Emirati artist Mohammad Kazem, who is a prominent figure in the “second generation” of contemporary artists in the UAE. Keeping in mind the dilemmas and contradictions young people have to deal with as they search for their place and role in society, the show addresses issues of the artists’ self-positioning in the public arena; and of the mediation between the private sphere, which is dominated by traditional values, and the public context. 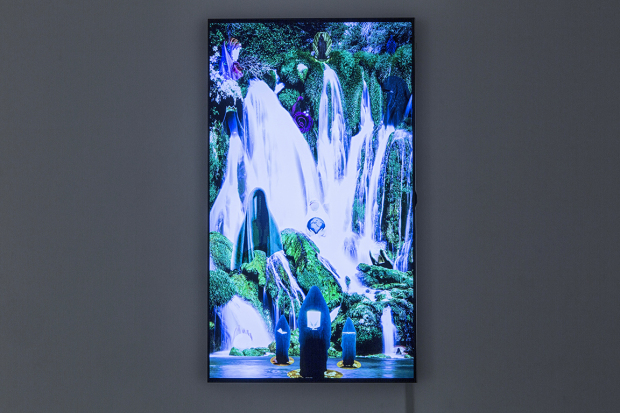 The Falls by Monira Al Qadiri.
The artists have used a variety of media and techniques to express the concerns, perspectives and worldview of their generation. Al Falasi’s photographic series, “Local Reciprocal” comments on the rapid socio-economic transformation in his country. Brightly painted walls of old, crumbling buildings contrast sharply with the sand dunes and the clear blue sky in the background in his striking compositions. The artist appears in the images with his headscarf covering his face, thus playing with the idea of public and private space, and of facing or not facing change.

Al Mazrou is displaying a set of three conceptual, minimalistic, playful sculptures featuring a skin-coloured ceramic orb and a bright yellow steel band. In the first two pieces titled “Tension”, the orb is precariously held in place on tilted wooden planks by the stretched band. The tension is palpable in these delicately balanced, gravity defying installations. In the third piece, “Relax”, the orb has got over its inertia to break free from the awkward balance and both the orb and the band lie side by side in a relaxed state.

Drawing 1 & 2 by Shamma Al Amri.
Through these works, the artist eloquently conveys her generation’s feelings of uncertainty, doubt and instability.

Al Qadiri explores changing ideas of morality in the region through visual imagery in spiritual popular culture. Her light box installation “The Falls” references the tradition of religious media in the Gulf region using waterfalls as the template image to envision the miracles of God. But concealed within the waterfall are various images culled from social media that represent new templates for morality, especially with regards to women.

Al Amri’s concerns are more formal. She explores the contradiction between control and lack of control, and between visual representation and abstraction through drawings layered with ink blots and ink spills.

Negative Heaps (of designated waste) by Vikram Divecha.
Divecha’s work comments on the urban landscape, compelling viewers to think about familiar sights that often go unnoticed. His installation, “Negative Heaps (of designated waste)” focuses on the murals decorating the walls of underpasses in Dubai’s ever expanding network of roads and flyovers. These designs, featuring cultural iconography that celebrates nationalistic pride, are fabricated through a laborious process that involves unique shapes being cut out with a water jet machine from rectangular tiles. Divecha spent many days at a local factory, observing the creation of a mashrabiya pattern for the underpass connecting DIFC and Business Bay.

He collected the leftover pieces of tiles from one section to create an installation comprising heaps of tile pieces of different shapes and colours, carefully arranged on the floor to correspond with the portion of the design grid they were cut out of, thus forming a kind of “negative” of the original design.

“These tiles are imported from Europe and cut in a local factory. So this is the wastage generated by the introduction of vernacular cultural diagrams into a modernist grid. These negative tile shapes are not seen on public walls, but they bear an inverted narrative of ideological mismatch, iconographic urban design and consumption,” Divecha says.

Twenty-three-year-old Jumairy is the youngest artist in the show. His intimate, thought provoking interactive installation, “I loved them/my sorrow” is tucked away in an enclosed corner of the gallery. It is a row of torches mounted on the wall. Visitors are invited to switch on the torches and read the words and phrases that become visible on the glass. The words represent shared secrets that evoke narratives, left to the imagination of every viewer.

“As a son, a brother and a friend, I have always kept secrets and promises from or for others. This work explores the depth of some of these secrets. When a torch is switched on, a private moment and an abstract hint about the identity of the person is revealed in public,” the artist says.

The catalogue of this inaugural show by U.A.E. Unlimited Arab Exploration, released during Art Dubai, is designed by Brusselssprout and features in-depth interviews with the young artists along with essays by local and international scholars, ensuring that their artistic journey is well documented as they take a big leap forward.

Jyoti Kalsi is an arts enthusiast based in Dubai.

A Public Privacy will run at Gallery of Light, DUCTAC, Mall of the Emirates, Dubai until April 8.