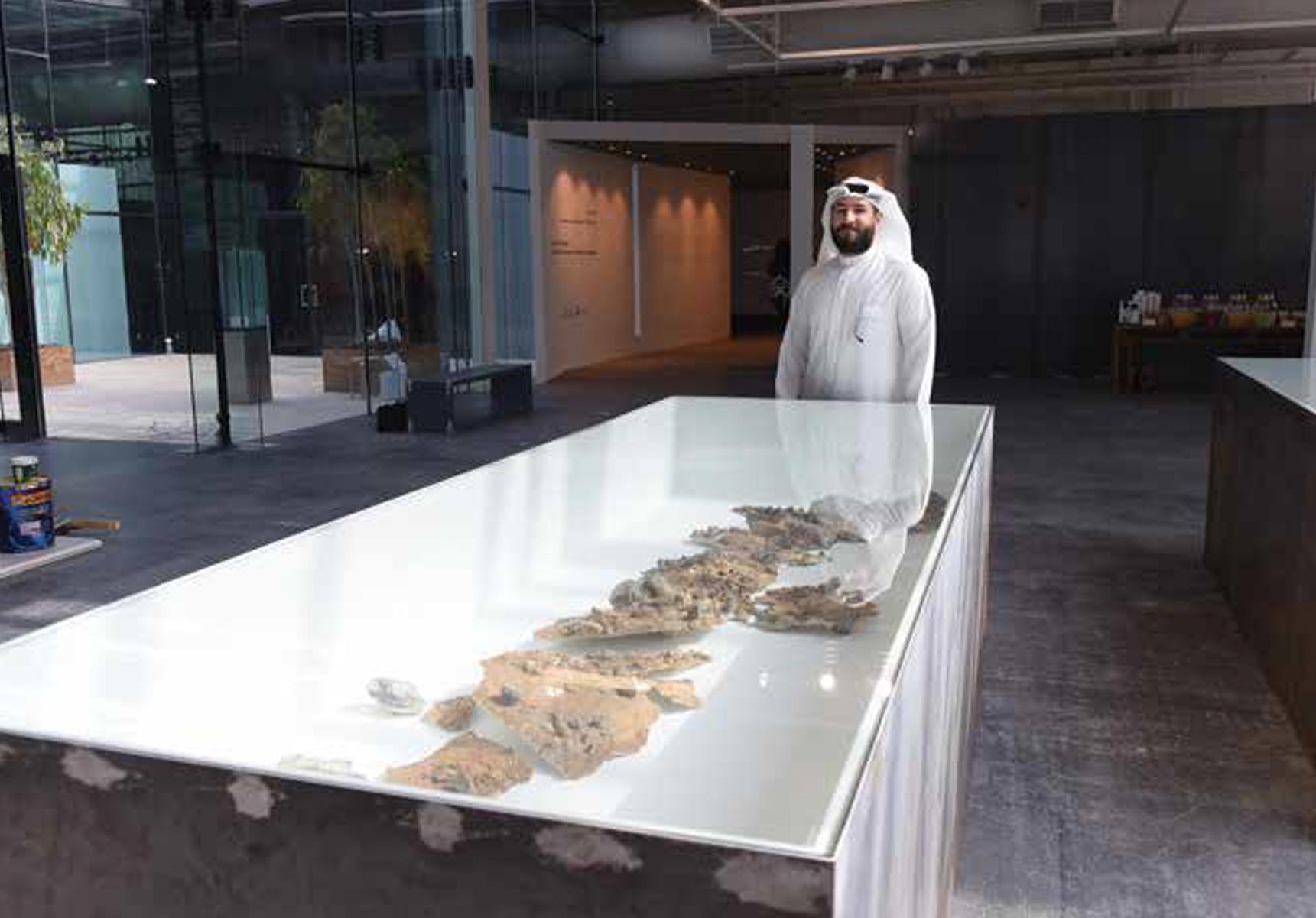 UAE Unlimited’s latest exhibition Bayn: The In Between reveals the work of eight Emirati artists working in a range of creative practices that explore the transformations taking place in the UAE, writes Patrick Martin Lichty

Bayn: The In Between, curated by Munira Al Sayegh, features the work of UAEbased artists alongside Saudi artist Manal Al Dowayan at Warehouse 421 in Abu Dhabi. It’s a collaboration between U.A.E. Unlimited and artists, curators, and institutions based in the Emirates. U.A.E Unlimited is a platform founded and supported by His Highness Sheikh Zayed Bin Sultan Bin Khalifa Al Nahyan and Bayn is produced in cooperation with Maraya Productions in Sharjah. Maya Allison, Founding Director of NYU Abu Dhabi Art Gallery, is Senior Curatorial Adviser to the project, acting as mentor to the exhibition’s curator, Munira Al Sayegh. “The vision for the future of artists in UAE is empowering,” said Shobha Pia Shamdsani, Executive Director of U.A.E. Unlimited. “To take this back to how we worked on Bayn—we asked Munira to curate an exhibition and what she created was a conceptual exhibition, giving the artists the opportunity to experiment, develop new techniques, using new mediums, to create their artworks; Sara Al Haddad’s work uses tissue paper as a new medium to crochet with her hand.” The exhibition focuses on new commissions, developed from monthly reading and discussion sessions.

Bayn: The In Between comes at an important time in the cultural life of the UAE. In the past two years, as there has been an intense conversation about its past and future. Last year’s Global Art Forum at Art Dubai dealt with the notion of “The Future Was.” Last February, 1980-Today: Exhibitions in the United Arab Emirates was an important retrospective on the development of contemporary art in the UAE. It was commissioned by the Salama bint Hamdan Al Nahyan Foundation and supported by the UAE Ministry of Culture, Youth and Community Development. In February 2017, Old is Gold, a conversation involving current Emirati artists considering Hassan Sharif and “the fi ve” at DUCTAC, and But We Cannot See Them: Tracing a UAE Art Community, 1988-2008 at NYU Abu Dhabi refl ected deeply on this lineage as well. All create a context for the discussion of the present. Curator Munira Al Sayegh is aware of the prescient nature of this exhibition, “We are in a crucial, transitional time. The UAE is in a process of self-refl ection about its identity as well as an outward assessment about its role as a part of the global cultural community.” Therefore, more than anything else, Bayn: The In Between sees the conversation of the past, and the future, and places itself in the present—the ‘in between’. 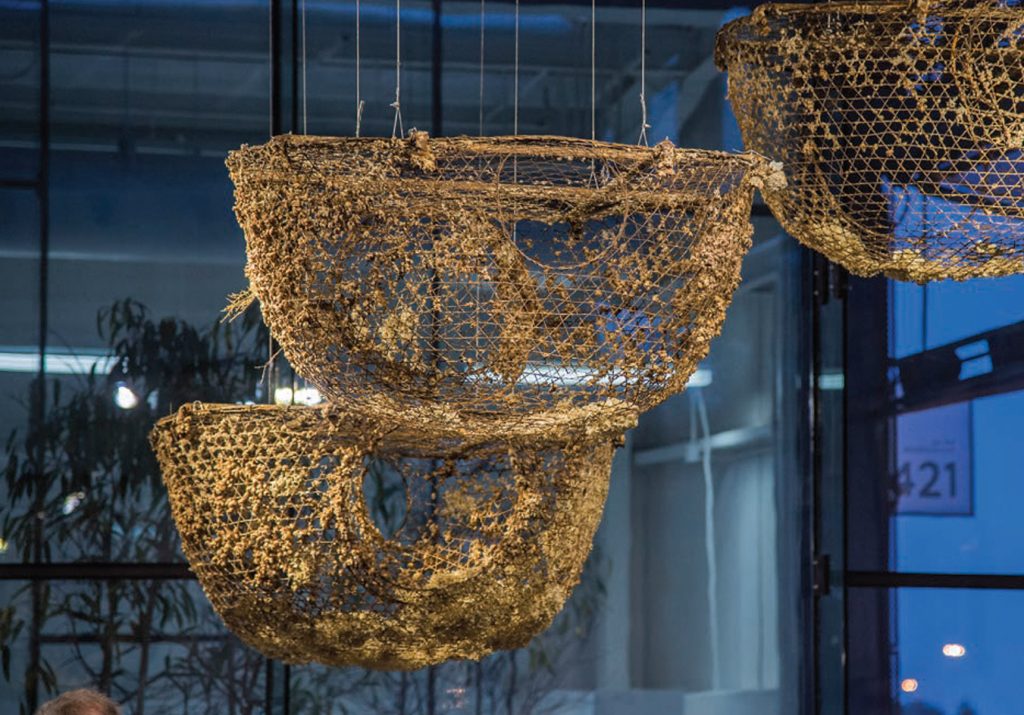 Talin Hazbar’s work investigates architecture and landscape through the elements that constitute it. A Syrian graduate of the American University of Sharjah, her works manipulate material and process. Her To the Desert works used industrial robots to make forms in sand, then used materials to solidify these processes. For her U.A.E. Unlimited work, Accumulation, she worked with Sharjah fi shermen and their gargoor (traditional dome-shaped fish cages). “These fi shermen usually clean these at sea, but I saw one doing it on the shore, and this was very interesting for me,” she says. “To see the accumulation of barnacles, weed, sponges that had collected on the form of the gargoor represented a process that was very interesting as identifi ed with it personally.” At the exhibition, curator Munira Al Sayegh explained that for Hazbar, the gargoor is a skeletal shape which the environment covers over time. This is a metaphor for the artist’s life; she is Syrian “to her bones”, but being in the UAE has created layers of experience that ‘clothe’ her, like the sea’s overlay of life on the traps.

Talal Al Ansari uses an industrial metaphor for the evolution of the UAE. The Factory of Men is based on an anecdote about the founder of the UAE, Sheikh Zayed bin Sultan Al Nahyan, regarding the nature of factories and the construction of the nation. During a discussion about the importance of the building of factories, Sheikh Zayed wanted to change the subject, as he felt that this was not the point of building the nation. Al Ansari’s work creates a playful vision of a manufacturing process, from the extraction of oil, a refi nery in the letters “Allah”, with beams of sunlight coming down from above, to a production line where the final product (a human heart) lies.“Now is the state of transition,” Al Ansari states, “And we of the UAE are engaged in the development of what we have been given to continue building a great nation.”

Bayn: The In Between, through U.A.E. Unlimited, brings UAE-based artists, curators, and institutions together to refl ect upon the present moment that is emerging while the past is investigated and the future unfolds before us. “We stand ‘in between’ the future and the past as we look forward and determine our distinct cultural path as part of a global conversation, and this exhibition contributes to that,” says Al Sayegh. And as the UAE continues to evolve in this crucial time of transition, exhibitions such as Bayn: The In Between will act as a record of this moment for the present for future times.