Signs of the Times by Muhammed Yusuf 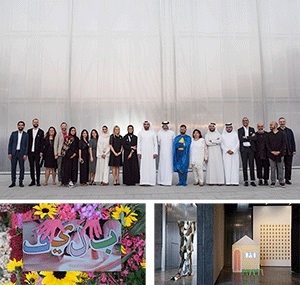 UAE Unlimited is a satellite platform founded and supported by Sheikh Zayed bin Sultan bin Khalifa Al Nahyan, one of the youngest and prominent patrons of the arts in the UAE.

“As our exhibitions have developed over the years, so too have the size and scale of the artworks. With this year’s edition, our commissioned artists were given the opportunity to produce artworks that would be on display in this spectacular space, Concrete, and to experiment with proportions found only in leading global museums,” said Sheikh Zayed bin Sultan bin Khalifa Al Nahyan.

Abdelmonem Bin Eisa Alserkal, Founder, Alserkal Avenue, Alserkal Programming and Concrete, said that “art and culture have an immeasurable impact on our sense of identity and purpose and joining hands to further the cause of arts and culture helps us widen our reach”.

In Arabic ‘Ishara’ means ‘sign’ - a most basic form of communication. It refers to linguistic marks, gestures and indications, as well as signals that transcend language, like those used in traffic or urban spaces.

They have created works for the exhibition that were suggested by the idea of lingua franca, and the meaning and use of language. The mediums include drawing, print making, videos and installations. The theme has been influenced by the UAE’s major port cities of Dubai, Abu Dhabi and Sharjah, where residents constantly negotiate many languages and meanings.

“If you see how art has progressed”, she said, “from Renaissance to Contemporary, it has changed constantly. Cell phones and the Internet cannot be ignored. One has to embrace them.

“We have given new graduates, some of whom are emerging though they have been practicing for a while, the opportunity to develop their work through mentorship and public exposure. Young artists are enterprising and innovative and have to be encouraged”.

Dubai-based guest artists Ramin Haerizadeh, Rokni Haerizadeh, and Rahmanian played an important role in supporting the commissioned artists and providing guidance to help grow their practices. The trio have created a work for the exhibition, which they describe as “visual poetry”. It is based on the environment they created in their studio during reading groups, which brought them together for weekly discussions.

Other works that are part of the exhibition are: Al Dabbagh’s ‘The Hanging Odes’, which is an interpretive poetry installation of the Al Mu’allaqat. Being mostly concealed due to the form of the installation, the words of the poems shown there are read in a different way, creating new meaning.

Khorchid’s ‘In Through a Trail’, prints and hanging scrolls add, subtract, hide and reveal information that is layered and waiting to be unfolded like tales. Al Qasimi’s video installation ‘Everybody was Invited to a Party’, is inspired by the 1980s Arabic version of ‘Sesame Street’ (‘Iftah Ya Simsim’), and uses puppets to present language and letters as malleable objects, without fixed meaning.

Lee’s ‘Mycelial Meshing’, uses infrastructural material - steel pipes, concrete and electrical cables - and looks at networks of communication through the overlay of mycelial networks. It is an interactive work, and reacts to the visitor’s intrusion.

Nasrallah’s ‘Forgotten Title’ encases 100 everyday objects in envelopes with a coded description written on the surface. The code does not have a key and will be forgotten completely over time, being left undecipherable.

Qizilbash has produced ‘Land Marks’, which depicts borders, where constant separation and surveillance takes place. Al Mansoori’s ‘Going Inside’, ‘In The Dictionary’, and ‘Body Language’, show three seminal texts and a speech by Sheikh Zayed. The texts are read aloud and the data was fed through an algorithm, producing a physical interpretation of the contents.

Al Ketbi’s ‘Ath’thaniyah’ is an exploration of the artist’s subconscious, retrieving and constructing a monument accessed through her dreams.

‘Ishara’ is also including two projects by local creatives who experiment digitally. Chndy and Cheb Moha are developing projects on Instagram accounts that deal with the themes of language and communication. Viewers can access them on screens and iPads in the exhibition and also on their own devices and follow throughout the exhibition - Cheb Moha @net3araf Chndy @digitalbo0oy.

The exhibition is curated by Karim Sultan, with Laura Metzler as Senior Adviser. The exhibition is designed by Waqas Farid. The catalogue has essays by UAE-based writers Saira Ansari and Taibah Albisher; this is the first time that UAE Unlimited has commissioned essays around an exhibition theme.

‘Ishara’ has been commissioned by UAE Unlimited in collaboration with Alserkal Programming, and is supported by the Ministry of Culture and Knowledge Development. It opened in the presence of Sheikh Zayed bin Sultan bin Khalifa Al Nahyan, Noura Al Kaabi, Minister of Culture and Knowledge Development, Mohammad Al-Murr, Chairman of the Board of Trustees of the Arabic Language Award and Abdelmonem Bin Eisa Alserkal.

Established in 2015, UAE Unlimited is an Abu Dhabi-based satellite platform which supports emerging Emirati and UAE-based artists by producing and promoting their works through collaborations with art and culture organisations across the country. It selects senior advisers who serve as mentors, not only for the artists, but also for the curator.

Concrete is a multi-disciplinary space in Alserkal Avenue and the first building in the UAE to be completed by the Office for Metropolitan Architecture (OMA), founded by Rem Koolhaas.

Abdelmonem Bin Eisa Alserkal is the driving force behind Alserkal Avenue, a cultural destination that houses many prominent contemporary art galleries in the region.


Sultan is the director of Barjeel Art Foundation, Sharjah and Metzler is curator, Maraya Art Centre.