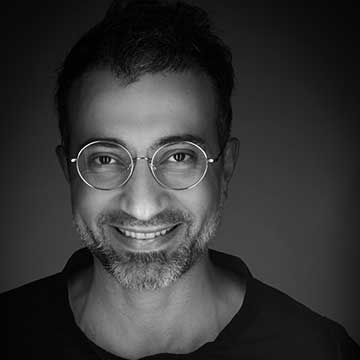 Rokni Haerizadeh (born 1978, Tehran) lives and works in Dubai. He attracted international attention during mid-2000s for his paintings that brought together his observations about social or public gatherings in Iran – particularly weddings, religious festivals, funerals and banquets – and reveal the hedonistic, ritualised or violent side of human nature that are buried in such spectacles. Since 2009, Haerizadeh has sought new definitions of painterly practice that could lift the medium off the white canvas. In his ongoing series of works on paper, Fictionville (2009–) Haerizadeh paints directly onto news photographs or stills taken from news footage, while his moving paintings are rotoscope video works composed of thousands of individually painted stills. Both projects are a discourse about the ideology and voyeuristic violence embedded in a media-powered spectacle.

He has participated in numerous exhibitions such as Carnegie International (2013), Here and Elsewhere at the New Museum, New York (2014) and the Sharjah Biennial (2011). His works are held in public and private collections, including the Guggenheim, New York, Carnegie Museum of Art, British Museum, Tate Modern, Devi Art Foundation, JP Morgan Chase Art Collection and Rubell Family Collection, among others. Haerizadeh maintains a collaborative practice with Ramin Haerizadeh and Hesam Rahmanian, and together they have staged two exhibitions at Gallery Isabelle van den Eynde, Dubai. In January 2014, the artists participated in the Robert Rauschenberg Foundation’s residency in Captiva, Florida. Koenig Books published a monograph of his works, entitled Fictionville in 2014.
Back