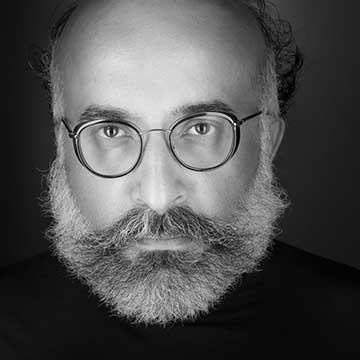 Ramin Haerizadeh (born 1975, Tehran) lives and works in Dubai. His practice involves carving into the debris of imagery that surrounds us. Collage remains at the core of Haerizadeh way of working but he also incorporates drawing, assemblage and video, and in doing so, he lifts his collages off the two-dimensional canvas. Common across the artist’s body of work is his galling laughter, instinct to show that history and meaning are articulated through easily manipulated imagery, and disregard for any assumed hierarchy of images in an age of digital reproduction. Haerizadeh’s everyday activities guide the way to his work, and according to the time and situation, he picks up a multiplicity of identities to meet everyone and everything from a different angle.

His studio is a theatre of the absurd, a space in motion transformed by the tension between play and acting that are later transformed into collages, diaries, objects, or actions being recorded on films or in photographs. Spanning almost 20 years, Haerizadeh’s body of work carries concealed messages about questions around gender roles and identity, religious intolerance, media manipulation, political propaganda and contemporary art, which ultimately aspire to challenge hegemonic ethics in general. Based in Dubai since 2010, he continues to develop his oeuvre that he started in the mid-1990s using images of post-war Tehran.

He also presents works alongside his brother Rokni Haerizadeh and long- time friend Hesam Rahmanian. The collaborative has participated in several institutional exhibitions such as The Maids at MACBA, Barcelona (2017), The Birthday Party (2015) at Institute of Contemporary Art (ICA), Boston, Slice a Slanted Arc Into Dry Paper Sky (2015) at Kunsthalle, Zurich, and All the Rivers Run Into The Sea. Over. / Copy. Yet, The Sea Is Not Full. Over. (2015) at the 8th Asia Pacific Triennial of Contemporary Art, Brisbane, among others.
Back