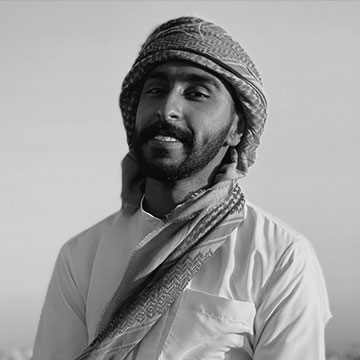 Born in Ras Al Khaimah, Emirati poet Ahmed Al Mannai holds a BA in International Political Science and Fine Arts from the United Arab Emirates University. He published his first poetry collection “Al Insan Geddan” (The Very Human) in 2018, and during his studies at the university he founded and chaired the "Poetry and Poets Council", a creative platform for student poets. Al Mannai was chosen to compete in the reality television show "Million's Poet".

He participated in several local and international poetry events, such as Tan-Tan Festival in Morocco (2015), Sharjah Folklore Poetry Forum (2014) and Al Meydan Program (2014, 2016). His poems have gained wide popularity on social media.

Al Mannai's recent publication of poems, titled “Messages to God”, came in the form of supplications based on carefully considered vocabulary, which the poet described as a godsend benediction.

Al Mannai believes in the power of words and regards poetry as an important and necessary tool to express deep feelings and thoughts. Since his childhood, he resorted to writing to explore what can only expressed with poetry. Moreover, he used various patterns and rhythmic structures of poetry to allow recipients to experience a wide variety of feelings.

In his poems, Al Mannai mostly uses spoken poetry, loaded with indications and symbols that go beyond the spoken dialect. This is evident when he recites and publishes his poems himself, especially on social media.