On how we communicate in the Polyglut Gulf by Melissa Gronlund 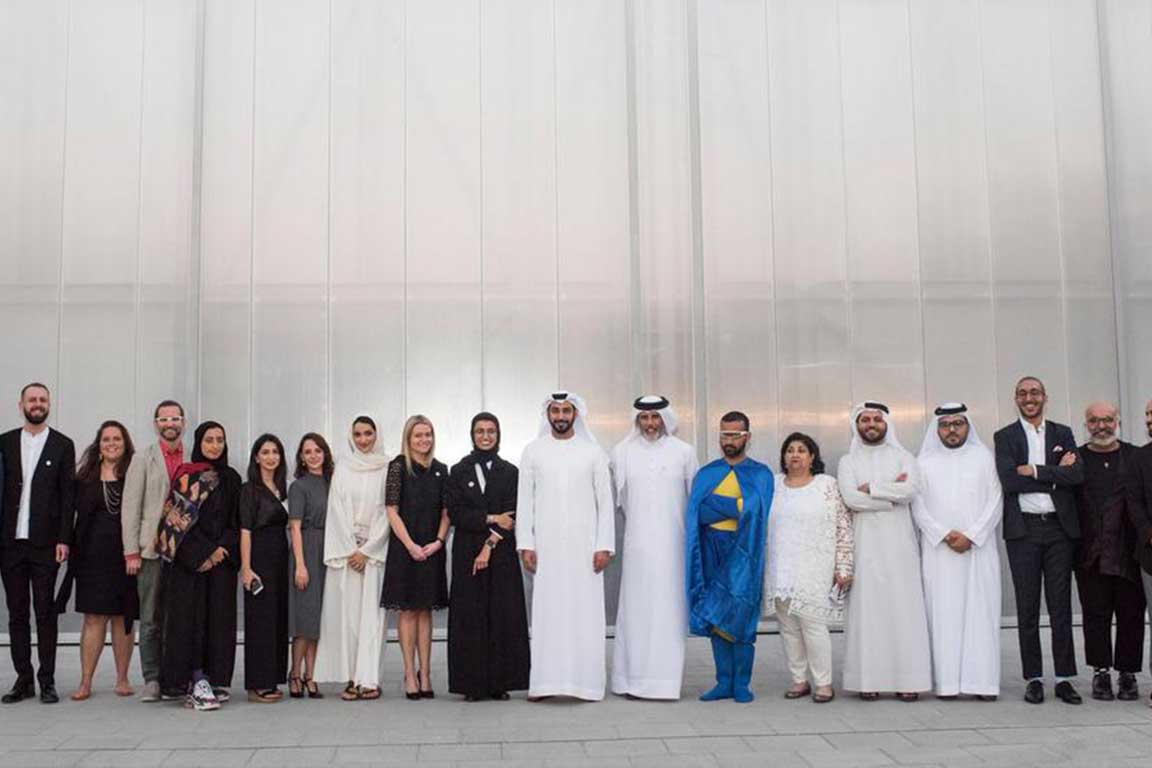 The artists, curators, and mentors of 'Ishara' pose with dignitaries at Concrete, Alserkal Avenue

A few years ago, leaving the Design District Dubai late one night – my first time to the complex, which is surrounded by a labyrinth of highways – I headed bullishly down an empty road. A lorry met me coming the other way and the driver began honking his horn furiously. He rolled down his window and shouted from his cab. He braked and crossed his arms in an X.

I looked ahead: I was heading straight into the oncoming traffic of the E44. I turned my car around. The lorry driver smiled and nodded.

It’s proof of what curator Karim Sultan tells me: “You don’t need language to communicate. It’s just one way.”

Kuwait-born, Sharjah-based Sultan has organised the exhibition Ishara: Signs, Symbols and Shared Languages around the idea of communication in the polyglot Gulf, where language is only one means of communication.

“In Sharjah, as soon as I walk out the door, by the time I get to the elevator, I hear four languages,” Sultan says. “The lingua franca of the international art world is English. If there’s someone from Hong Kong and someone from Sweden, they communicate in English. It’s a vehicular language.”

He says that this was the case for him growing up. “My father’s from India and my mother’s from Syria, so they communicate in English. It’s a Gulf story – I’m an 80s Kuwait kid.”

'Approaching language not as a given, but as a malleable facet of daily life'

Sultan was asked to curate this year’s show for UAE Unlimited, an Abu Dhabi-based foundation supported by Sheikh Zayed bin Sultan bin Khalifa and showing at Concrete, the exhibition space at the heart of Alserkal Avenue in Dubai.

Spread out within Concrete’s dark, high-ceilinged space, Ishara’s works approach language not as a given, but as a malleable, arbitrary, and even elective facet of daily life.

The Lahore-born artist Saba Qizilbash, for instance, made a series of small drawings of border crossings and visa checkpoints, Land Marks (2018). The drawings seek to articulate what she calls “checkpointspeak,” or the way that she, as a Pakistani national in an era of increased border security, switches to a docilely proffered English when asked for her visa. “I smile. I smile too much,” she writes in a text accompanying the work. “I remember to mute my mother tongue and in place speak a new, complacent language. One that guarantees permission to enter.” 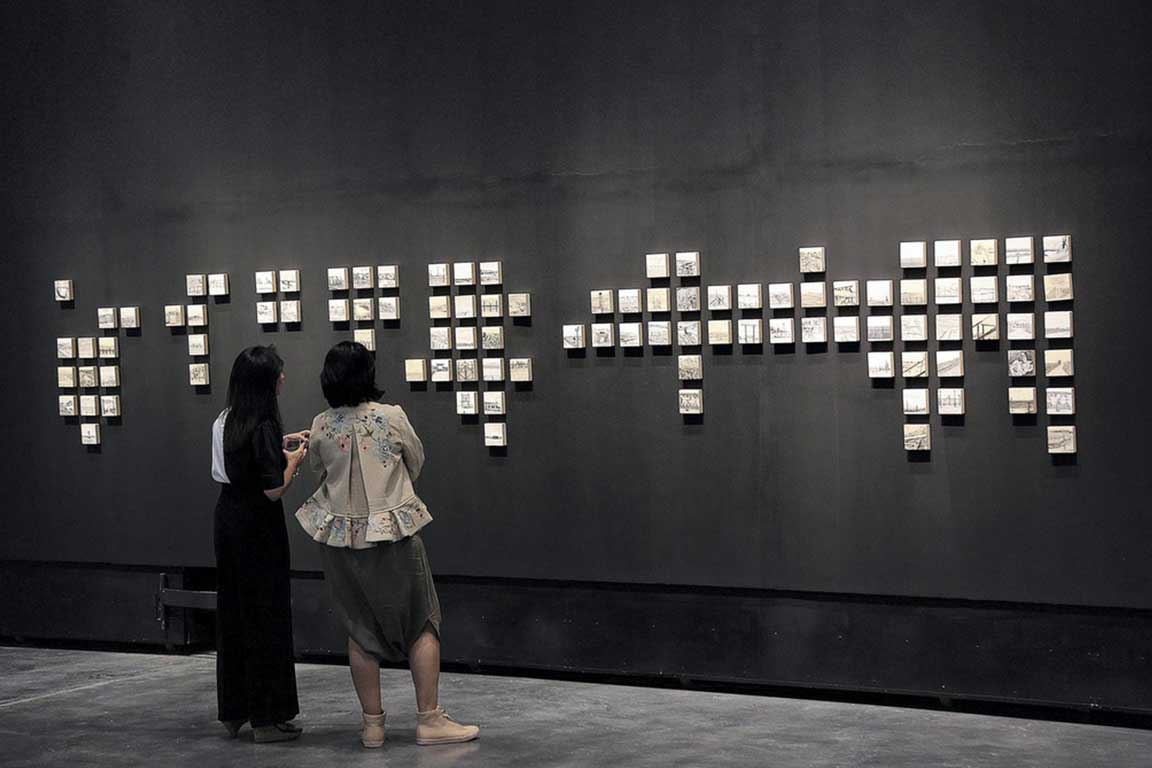 Emirati artist Amna Al Dabbagh embroidered the 10 long poems that comprise the Al Mu’allaqat, dated to the pre-Islamic era, onto dark-coloured woollen textiles that hang from the ceiling.

“Amna looks at language in a very historical way,” says Sultan. “These 10 odes were orally passed on. If you can imagine, in the pre-Islamic era there wasn’t a great deal of wealth, but the one technology they had was language, and their command of the language was so sophisticated, so incredibly rich, even before there was a formal written language. She created this textile installation that was also inspired by books of concrete poetry.” 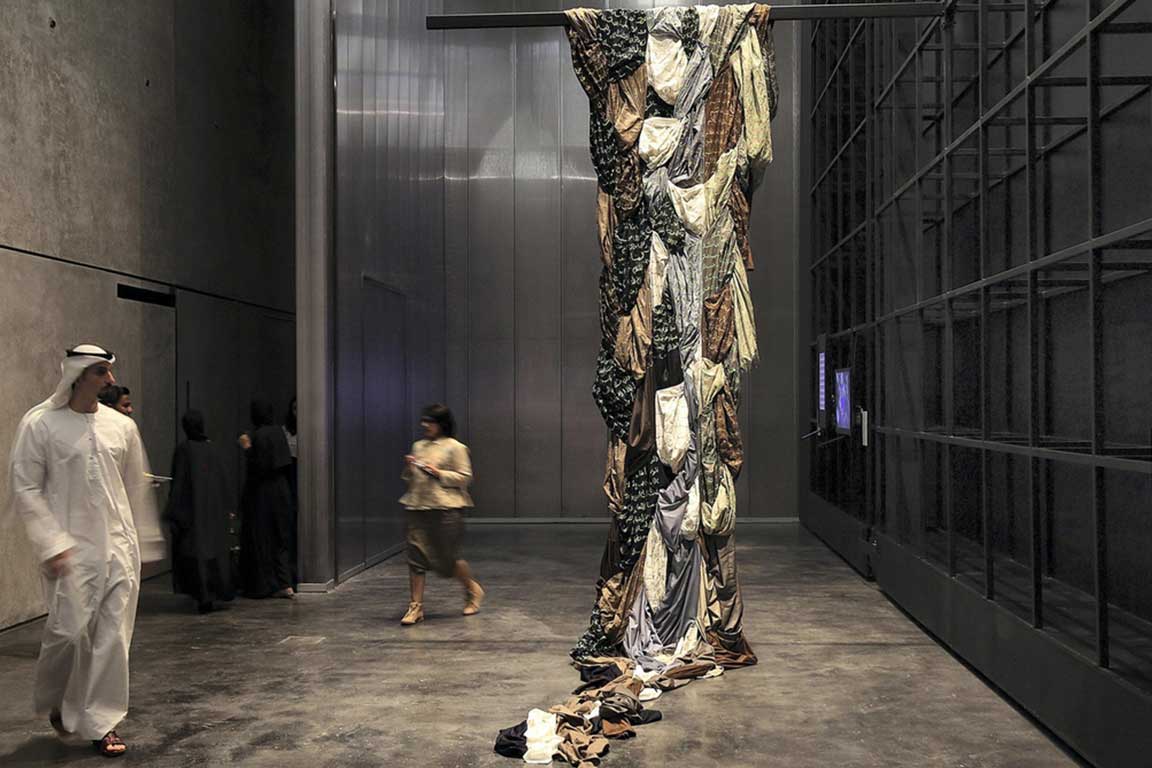 The relationship between visual art and poetry has been well explored in the Western art world but the treatment of the field in an Arab context has been largely limited to calligraphy, where text and art naturally converge. By focusing on communication as much as text, Sultan allows other facets of language to come to the fore, such as the politics of language, as in Qizilbash’s work, or how it exists as a system.

Flounder Lee, an assistant professor of art at the American University of Dubai, looked at new research that suggests that plants relay messages to each other through the mycelium layer – the undergrowth of mushrooms that covers a forest floor. “There was an experiment with two tomato plants,” Lee explains. “One was attacked by aphids, and they found that one plant was able to tell the other plant to boost its defences. When there was no mycelium layer connecting them, however, both plants died.”

Lee’s work elaborates on this idea to show how infrastructure is necessary for communication to take effect. He devised an installation in which the sound of visitors in the space is adapted into a pattern of coloured light, emitted from bulbs at the top of tall scaffolding poles that reach the ceiling. “These are the materials of infrastructure,” he says. “I left it all exposed.”


The exhibition also has a research and discursive element through the mentorship of UAE Unlimited’s executive director Shobha Pia Shamdsani, Maraya Art Centre curator Laura Triggs Metzler, and the artists Ramin Haerizadeh, Rokni Haerizadeh and Hesam Rahmanian. The group met artists in the months before the exhibition opened in the home of the Haerizadehs and Rahmanian, who live and work in a Dubai villa. A studio-cum-home, it is packed with their paintings, collages, and sculptures, and was the site of videos and performances in the late 2010s.

In keeping with the spirit of the generative process, the exhibition also contains the hand-painted table that the group met around, as well as a selection of their reading material, such as celebrated Palestinian poet Mahmoud Darwish’s Mural.

'The periphery of the art scene'

The sense of an intimate, even hermetic system of signs and meaning that has developed within the Haerizadehs’ and Rahmanian’s practice is echoed in Ishara by Shaikha Fahad Al Ketbi’s beguiling triptych of a video, Ath’thaniyah (2018), which shows her in a rocky section of the Dubai desert setting up satellite dishes and other means of communication on wooden platforms. At certain points she overlays her drawings on the footage, where they appear like Basquiat-like scrawls or squiggles, suggestive of meaning known only to her. Next to the video is a collection of satellite dishes taken from the walls of her Dubai studio – a casual move beyond the confines of what “deserves” to be included in exhibition, echoing the inclusion of the table and other accoutrements from their home. 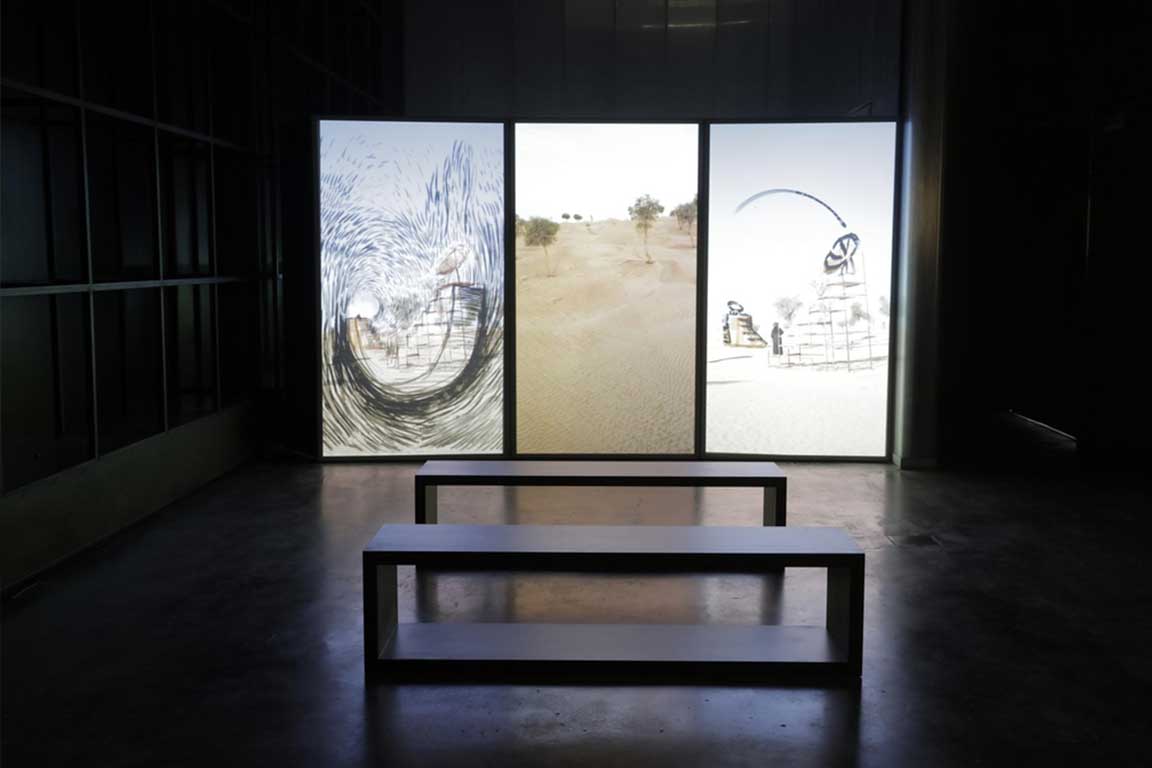 Sultan says he was keen to include artists whose work was challenging, but not necessarily considered within an art practice. “You have the art scene, but you also have people on the periphery – designers, digital creatives.” The exhibition also features a work that will unfold on social media, by Chndy

(@chndy) and Cheb Moha (@chebmoha). “Salem Al Mansoori is a designer and his repertoire is incredible, focused on generative design and algorithms. If he called himself an artist, he’d be read in a very different way.”

Al Mansoori made four sculptures that are representations of patterns of speech. He recorded himself reading poems such as Hassan Sharif’s Going Inside, in which he tries to define what an artist is, or Abbas Kiarostami’s In the Dictionary – and developed an algorithm based on the rhythm of his speech, which then generated 3-D printed polyamide sculptures in a mix of the poetic and the mathematical. “In Kiarostami’s poem,” he says, echoing the fluctuations of language’s capability, “he argues that in any dictionary the definition of nothing should be the definition of everything.”