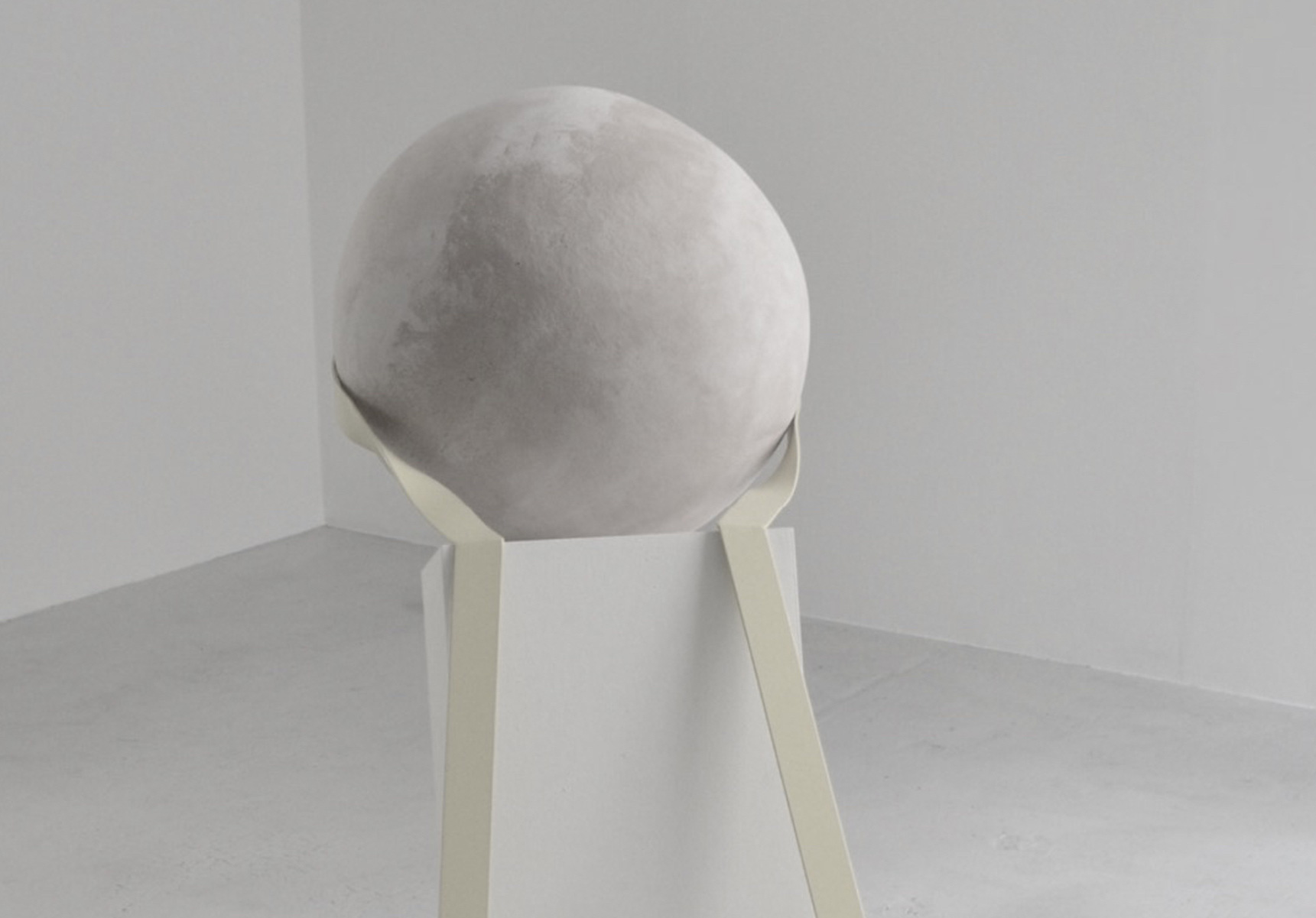 by: Anna Seaman. The National.

Suspended precariously from a column platform, a large stone ball is held in place by an oversized yellow elastic band that is balanced only by the weight of another ball hanging on the other side. At least this is the visual illusion. In reality, the stone balls are made of terracotta and the elastic band is powder-coated steel. It is the most recent piece of art from a very promising young Emirati artist, Shaikha Al Mazrou, who is not only interested in the formal aspects of minimalism, but also has a fascination with materiality in art. Hence she chose to play with perspective for this sculpture series, titled Tension.

Al Mazrou is one of six young artists chosen for a new annual art exhibition to be presented under the theme and title A Public Privacy for the inaugural edition of UAE Unlimited Arab Exploration, a platform promoted by and under the patronage of Sheikh Zayed bin Sultan bin Khalifa Al Nahyan, who is an avid art collector. Each year, the exhibition will bear a new subtitle and this year A Public Privacy opens at Dubai Community Theatre & Arts Centre, where new works by a group of emerging Emirati, locally based and GCC artists, will be presented.

The curators, Cristiana de Marchi and Mohammed Kazem, have carefully selected those artists who are at points in their career where they are not fully established but far enough along to show true dedication to the field.

"The focus is on the young generation," says de Marchi. "We wanted to focus on those who have already made their decision to be an artist." They chose the title to explore the perhaps conflicting notions of public and private spaces in the UAE.

"We really wanted to work with the idea of public and private dimension, with the main focus being on a contradiction in the widest sense. These are young artists and they are growing with a different kind of perception of roles and limitations to those who came before them. We wanted to see how they are dealing with critical issues, how they convey messages and how they position themselves within this society."

Al Mazrou’s work, which cleverly deals with the gap between perception and reality, is juxtaposed with Shamma Al Amri’s paintings and drawings. Where Al Mazrou uses sculpture and form, Al Amri, who is also Emirati, uses more traditional artistic materials in a contemporary way.

Carefully constructed drawings are presented next to others layered with inkblots and ink spills that do not depict any form or reflect any control.

"By combining paintings whose constitutional elements are the result of either an extreme formal control or, on the contrary, a total lack of it, Al Amri implicitly questions the limits of rules, without resolving the conflict in either direction," de Marchi explains in her introductory essay.

For Kazem, the choice to include this artist was essential because of her medium. "In fact, we don’t have that many really good painters in the UAE in the contemporary art scene from the younger generation. We chose her also for that reason."

The other two Emiratis in the show are true multitaskers: Hamad Al Falasi, a physician who is working as a photographer and designer while developing his own clothing line, and Mohammed Jumairy, who is still in his early 20s.

"Jumairy is truly part of the young generation. He uses internet platforms to show his work and he is also a musician working on a combination of different elements," says de Marchi. "He is a young, smart guy."

Alongside the four Emiratis are two other artists: Vikram Divecha from Indian, and the Kuwaiti Monira Al Qadiri.

"Myself and Mohammed have been developing the idea that although the UAE has a distinct national character, it is still home to many people from many nationalities and we have important contributions of art from the Gulf region and the subcontinent. So we really wanted to have the first show with an opening to set that kind of point."

Divecha, whose work responds deeply to the urban environment, will be showing Negative Heaps (of Designated Waste). For this, Divecha collected negative cut-outs from the tiles that decorate underpass road tunnels in the UAE, arranging them along the wall of the Dubai Community Theatre and Arts Centre (Ductac) to make a social comment on pieces that do not reach public visibility and are not worth celebrating.

Al Qadiri investigates issues of public image and identity through her new video work The Falls (2014).

"It was important for us to express a number of different voices and to stay under the umbrella of what His Highness is trying to do and that is to support the next generation," concludes de Marchi.