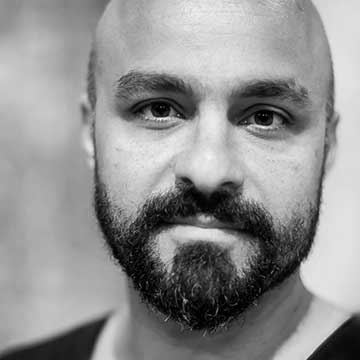 Hesam Rahmanian (born Knoxville, 1980) lives and works in Dubai. His works begin from found fragments – a discarded household object, for example, an innocuous shape in a polaroid or a smear of hardened, leftover paint – that have some glancing resemblance to a body, a face or an animal. From this simple bricolage, Rahmanian searches for ways that he can develop his impressions, either on canvas or as assemblage, with a playfulness and spontaneity that is faithful to his initial glimpse. This first-thought- best-thought way of working has emerged steadily from the artist’s early painting series, which were underpinned by metaphor and social commentary. Rahmanian has held solo exhibitions at Gallery Isabelle van den Eynde, Dubai (2013), Paradise Row, London (2011) and Traffic, Dubai (2010). He also participated in a group show at the Royal College of Art in London as one of the eight finalists for the MOP CAP prize (2011). He also works collaboratively with Ramin and Rokni Haerizadeh, and the three artists have staged two collaborative exhibitions in Dubai (2012, 2014). In 2014, Rahamanian and the Haerizadeh brothers attended the Robert Rauschenberg Foundation’s residency programme in Captiva, Florida.
Back