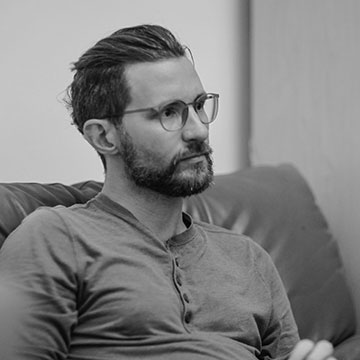 Flounder Lee is an artist/curator/educator living in the UAE where he is an Associate Professor of Studio Art at American University in Dubai. He grew up on a farm in the United States and went on to receive his BFA from the University of Florida and his MFA from California State University Long Beach—both in studio art and photography.

For the last decade, several overlapping themes have run throughout his work: post-colonialism, mapping, science, and environmental change. He uses various media such as photo, video, performance, sound, and installation to create work that touches on important topics. Many of the same topics and media are also part of his curatorial practice. Holdovers from his first major of aerospace engineering such as rules and preset conditions are common in his practice.

Flounder’s work has been shown extensively both nationally and internationally including Barcelona Art Contemporani 11; Documentation: Photography as Witness at the University of Maine; Bewegterwind (Moved Wind) in Hesse Germany, and Re/Move at Foto, kino i video savez Vojvodine in Novi Sad, Serbia.

He has curated numerous exhibitions such as Double Vision: A Dual Channel Video Festival, Mapable, and TPS Reports: Performance Documents. He founded then directed SpaceCamp MicroGallery in Indianapolis, Indiana for three years.