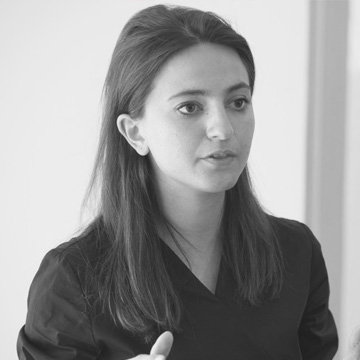 Talin Hazbar (b. 1988) received her Bachelor of Architecture (B.Arch) from the American University of Sharjah in 2012.

Hazbar defines herself as an observer, and her work is driven by her passion and curiosity for architecture and design. Her work accentuates the importance of designing within natural systems, experimenting with materials to understand their behaviour, challenge the properties, and recall natural built structures. For her, impermanence is expressed through creating structures that allow for organic growth within a set of parameters which control and predict its growth, but always allow for unpredictable moments to exist. The process of transforming towards growth or decay, allows Hazbar to understand the state of temporality that exists around and within us.

In 2010, and again in 2012, Talin was selected to represent American University of Sharjah for the Presidents Medals Student Award from the Royal Institute of British Architects. She has been the recipient of various regional and international art awards including the British Petroleum Award, Skyward Award Gulf Research Meeting Award.