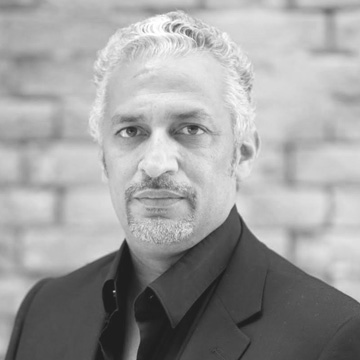 Mohammed Kazem (born 1969, Dubai) lives and works in Dubai. He has developed an artistic practice that encompasses video, photography and performance to find new ways of apprehending his environment and experiences. The foundations of his work are informed by his training as a musician, and Kazem is deeply engaged with developing processes that can render transient phenomena, such as sound and light, in tangible terms. Often positioning himself within his work, Kazem responds to geographical location, materiality and the elements as a means to assert his subjectivity, particularly in relation to the rapid pace of modernisation in the Emirates since the country's founding.

Kazem was a member of the Emirates Fine Arts Society early in his career and is acknowledged as one of the 'Five', an informal group of Emirati artists - including Hassan Sharif and Abdullah Al Saadi - at the vanguard of conceptual and interdisciplinary art practice. In 2012, Kazem completed his Masters in Fine Art at the University of the Arts, Philadelphia. He has been participating in the Annual Exhibitions of the Emirates Fine Arts Society in Sharjah since 1986, as well as numerous editions of Sharjah Biennial, receiving first prize for installations in 1999 and 2003, and in 2007, co-curated the Sharjah Biennial. In recent years, Kazem has participated in several group shows at the Mori Art Museum (2012), Boghossian Foundation (2013), Gwangju Museum of Art (2014), the 2014 edition of the Fotofest Biennial in Houston and Here and Elsewhere at the New Museum (2014). He has exhibited at the Venice Biennale three times: in 2009 as part of a group exhibition curated by Catherine David, in 2013, he represented the UAE with an immersive video installation entitled Walking on Water, which was curated by Reem Fadda, and in 2015, he showcased works from the Tongue series at 1980 - Today: Exhibitions in the UAE, curated by Sheikha Hoor Al Qasimi. In November 2014, he presented two solo shows Sound of Objects at Gallery Isabelle van den Eynde in Dubai, and Memorising by Means of Observing at Taymour Grahne Gallery in New York. His works are held in the collections of the British Museum, Guggenheim Abu Dhabi and New York, Mathaf: Arab Museum of Modern Art, Ullens Centre for Contemporary Art, Sharjah Art Foundation, Barjeel Art Foundation, Vehbi Koç Foundation, HH Sh Zayed bin Sultan bin Khalifa Al Nahyan among others.