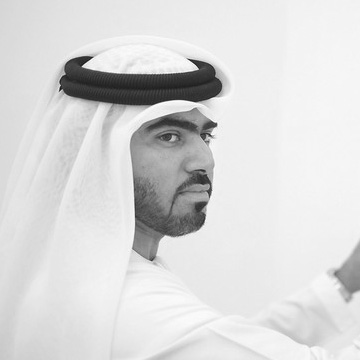 Hamad Al Falasi (b.1979) graduated from the UAE University in 2004 with a degree Medicine and Health Sciences. While having an interest in art from an early age, he began his practice in earnest in 2005.

In his work, Al Falasi delivers anonymous and ambiguous messages, inviting the audience to provide their own interpretation. He derives his materials from the details of everyday life and experience, finding creative fodder in local tradition and culture.

Frequently appearing in his own photographs, Al Falasi combines elements of spoken word and public dialogue, often integrating geometry and calligraphy, to produce a brand of autobiographical portraiture.

Since his first solo exhibition at Zayed University (2016), Al Falasi has exhibited widely in group shows and in competition, including MP2013 - Marseille-Provence, European Capital of Culture, Galerie Gourvennec Ogor, (2013).