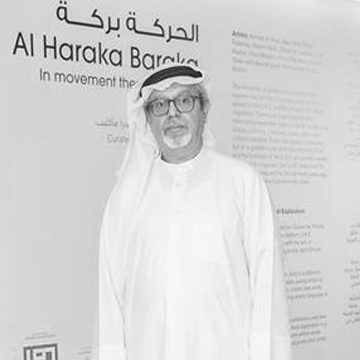 Mohammed Ahmed Ibrahim (b. 1962) is an Emirati artist from Khor Fakkan and one of the pioneer "five" conceptual artists from the United Arab Emirates. He holds a degree in Psychology from Al Ain University, and completed a residency at Le Consortium Art Centre in Dijon, France.

Ibrahim employs a variety of artistic means to create works that often bring him in direct contact with nature. Hashed leaves, clay, paper, glue are among the materials that appear in Ibrahim’s paintings, which reflect on his academic background in archaeology and psychology.

His work is in the collections of Qatar’s Arab Museum of Modern Art, the Sharjah Art Museum and Sittard Art Center, Netherlands, as well as, the Centre Pompidou and HH Sh Zayed bin Sultan bin Khalifa Al Nahyan Collection.

He recently participated in a collateral event at Kochi Murzi Bienniale 2016-2017.