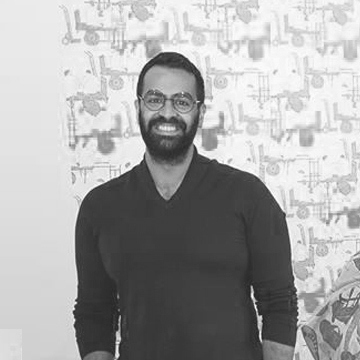 Khalid Mezaina (b. 1985) is an independent graphic designer, illustrator and artist who received his BS degree in Visual Communications from the American University of Sharjah, UAE.

His work draws from the fabric of Emirati culture, often focusing on particular buildings or design features, and stylizing traditional elements while simultaneously maintaining a cultural reverence and a contemporary relevancy. He is inspired by comic books, music and Dubai's ever-evolving landscape and people.

Through his work with art organizations such as the Sharjah Art Foundation and Tashkeel, Dubai, and his involvement in the broader art community, Mezaina was inspired to pursue an artistic practice of his own. He participated in exhibitions, projects and residencies, both in the U.A.E. and internationally, including The Salama bint Hamdan Emerging Artists Fellowship programme (2014-2015)