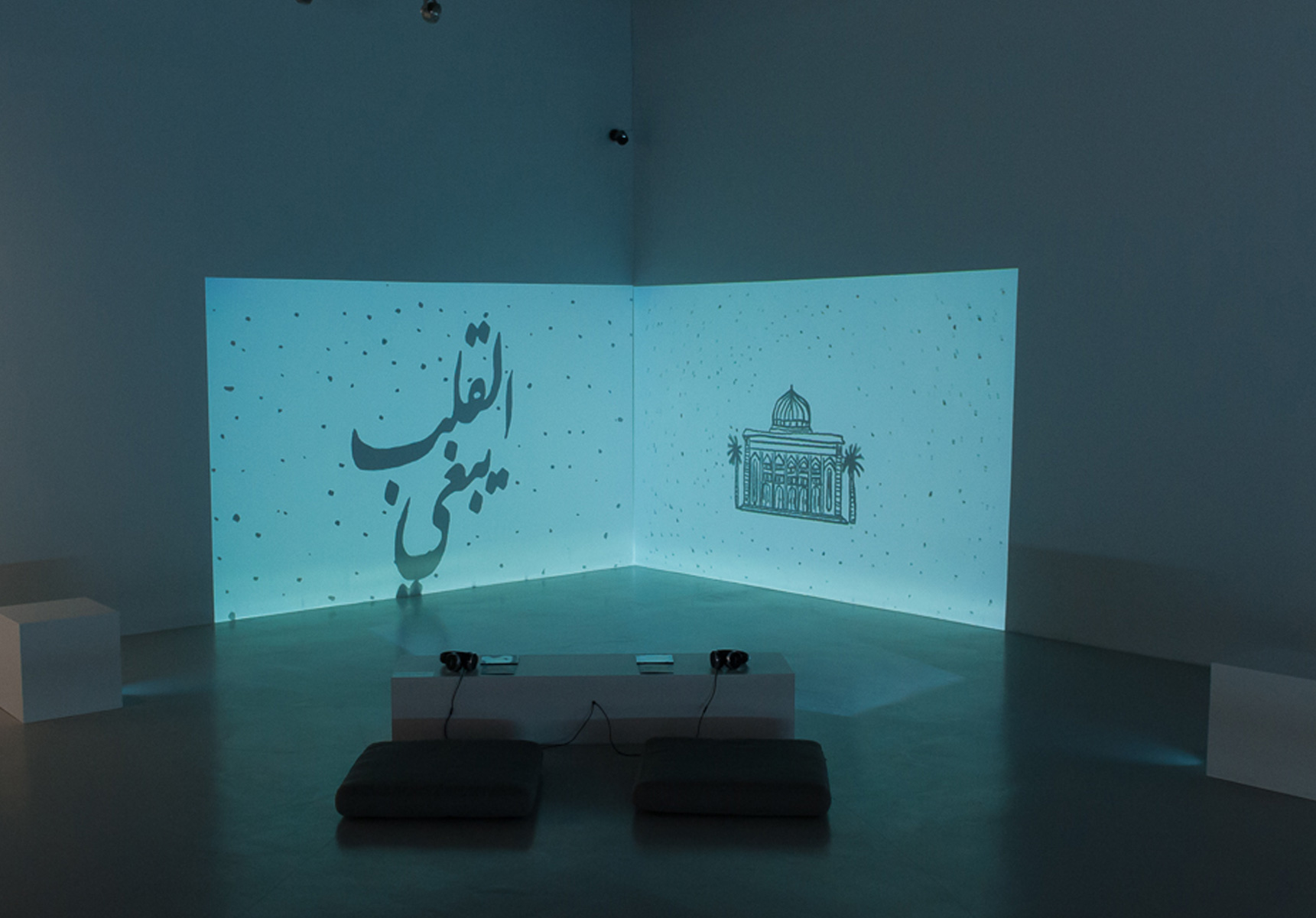 by: Rachel Spence. The Financial Times

In a letter to his sister in 1970, the American poet George Oppen wrote: “The issue is happiness, there is no other issue … to think about politically.” Oppen, who was a communist, might have been surprised to find that the prime minister of the United Arab Emirates and ruler of Dubai, Sheikh Mohammed bin Rashid Al Maktoum, is in total agreement. Earlier this year, he appointed a new Minister for Happiness in an effort to “create social good and satisfaction”.

It’s unlikely anyone sleeping in beds like those in “Plot”, an installation by Sreshta Rit Premnath at this year’s Art Dubai, will write such a letter. Skeletal bunks just wider than a man’s body, they are made to the dimensions of the real beds used by migrant labourers on the Emirates’ construction sites.

“Plot” was one of eight site-specific works in Projects, the no-profit curated section of the Art Dubai fair. It has appeared in different iterations elsewhere but here — where the beds were propping up a length of corrugated plastic on which two photographs of the same real-estate billboard in Dubai had been layered — the work served both to spotlight the conditions suffered by the UAE’s maltreated migrant labour force and the kerfuffle that flared up when Donald Trump made one anti-Muslim remark too many and his Dubai partner Damac temporarily removed his name from one of its construction sites (business continued as usual).

It was surprising to find such gritty, pointed critique at Art Dubai. Now in its 10th edition, the fair has gone from strength to strength in many ways. Presiding over not only the gallery booths — this year 94 from 40 countries — but also a whirlwind of talks, prizes, artist projects, residencies, film and radio programmes, it has acted as a catalyst for a wider contemporary art scene in the Emirates.

Yet no one can pretend it is without issues. The fair is held under the patronage of the Dubai royal family, and all work must be approved by Dubai’s Culture & Arts Authority. There’s little allowance for nudity, nor the wrong kind of politics. (Expressions of Palestinian resistance are permissible. Overt celebrations of the Arab spring, not so much.)

The labour problem is also thorny. Touching the international art world directly as the Guggenheim and Louvre build institiutions on Saadiyat island in Abu Dhabi, it is the subject of a fierce campaign by the artists’ collective Gulf Labor Coalition. Yet Premnath’s work got the nod.

“Don’t overstate,” was the only advice he received, he told me when I asked if he was given advisory guidelines. When I asked Art Dubai Projects curator Yasmina Reggad if she thought “Plot” controversial, she replied calmly: “It does not necessarily relate specifically to local issues.”

Slackening the reins on expression does no harm to a country anxious for respect on the world’s cultural stage despite its tenuous civil liberties record. Although it is undoubtedly one of the more liberal Gulf states, the UAE has been slammed by Human Rights Watch for arbitrary detentions, disappearances, allegations of torture, lack of free speech and poor labour rights.

Just as the books on our shelves bear witness to our psychology, the art on our walls reveals if not what we are then at least how we wish to be seen. It was true in Renaissance Florence when Lorenzo de’ Medici harnessed his identity to that of Michelangelo. It was true when the CIA supported the Abstract Expressionists as a symbol of US creativity. It was true last month when Tate Modern ditched BP as its sponsor after a raft of anti-oil publicity.

And it was certainly the case at the inaugural edition of the Dubai Photo Exhibition. Held under the patronage of Dubai’s crown prince, Sheikh Hamdan bin Mohammed bin Rashid Al Maktoum, it not only brought together 800 photographs curated in 23 national pavilions, it also displayed a selection from the photography collection belonging to the crown prince himself.

Largely drawn from a body of work made by Egyptian-born photographer Oscar Mitri in the 1960s, this was a glimpse of the region before oil exports transformed it into one of the richest economies in the world; a time when cinemas were run by electric generators and donkeys transported water into the desert for storage in temporary wells. Each picture is carefully chosen to illustrate the country’s journey towards modernity. The portrait of Dubai ruler Sheikh Rashid bin Saeed Al Maktoum — who steered his Emirate through its transformation — shows him, the caption tells us, speaking to a journalist “about his grand aspirations and projects which would go on to become a reality”. Two young women are captured in the courtyard of their college where they are training to be student teachers. Most remarkable was the photograph of Dubai’s current ruler, Sheikh Mohammed Bin Rashid Al Maktoum, languishing in the desert with his pet leopard. The pose, we are told, demonstrates his “love and attachment to the wildlife”. I would have entitled it “My cat, my country”, for it’s hard to imagine a more potent declaration of sovereign power.

With 75 different nationalities present — 50 per cent of its population comes from South Asia — the hybridity of the UAE is one of its defining characteristics. (As such this makes it a paradigm of the contemporary art world, where so many practitioners are born in one place, educated in another and based somewhere else.) Although this migrant population washes in and out like the tide, enough have put down roots to make the country a source of artistic production in its own right. This week, it was clearer how keen the UAE’s cultural guardians are to emphasise their native scene.

At Dubai Photo, the UAE had its own pavilion next to the crown prince’s collection. At the fair, more UAE galleries — 13 in total — were showing than ever before. In the neighbouring emirate of Sharjah, the Maraya Art Foundation mounted “In Movement There is Blessing”, an exhibition of UAE-based artists which highlighted the diversity of their nation through works such as Syrian-born Tulip Hazbar’s conversations with residents of Sharjah about their favourite music.

Meanwhile in Dubai, a new no-profit programme at Alserkal Avenue — the gallery hub that is the heart of Dubai’s commercial art world — chose “Home Grown” as the theme for its first set of commissions. Six artists — including one duo — from Dubai and beyond were asked to make work inspired by Alserkal’s district, Al Quoz. Among several startlingly original interventions, that of Brazilian artist Jessica Mein stood out. Originally from São Paulo, she moved to Dubai six years ago. Entitled Topologies, her project saw her invite people from Al Quoz — primarily an industrial area — to make rubbings in pencil of inconspicuous elements of their environment. The results — softly outlined leaves, anonymous road surfaces, the spiral curves of the ubiquitous air-conditioning units — are now displayed on the wall of her warehouse in a shimmering abstract grid.

If you can map your world on to your walls, does that mean you belong? In an age of migration, is home a country? A bunk bed? The ground beneath your feet? Let the Egyptian poet Anton Shammas have the last word. On show at the Barjeel Art Foundation in Sharjah, a melancholy painting of a cactus by Asim Abu Shaqra, a Palestinian Arab who lived within Israel all his life, prompted Shammas to observe: “Here’s the homeland, hanging on the wall.”